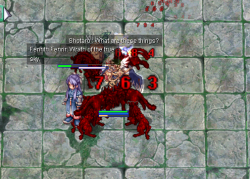 To start this instance, go to Prontera - Warper NPC 160 193 - Instances - Fenrir and Sarah or alternatively you can just type @instance and follow the same route.

After completing the instance for the first time, talk to Professor Bernhard (@warp dali02 97 142) to receive a reward. He will offer you a free accessory. You can choose between

Assistant Professor will offer to sell you a new

Sarah's Right Earring in exchange for 1

You may instead enchant an earring (of the two types that can be purchased here) you have equipped. Enchantment will cost four (4)