It is a Instace where you need to pass through a tower with 100 floors (plus an extra room), where the higher the floor, the stronger the monsters. To go up the floors it is necessary to eliminate all the monsters on the map (taming a monster will cause you to be unable to proceed to next floor), after that the portal to the next floor will appear. The tower announces how many monsters are left to be eliminated as they are being killed. After going up one floor the player cannot return to the previous one unless he leaves the tower.

Abilities which unavailable inside the Instance :

There is no restriction on the use of items, but items that reproduce blocked abilities will fail.

Here at RagnaRock, you can reach the instance NPC in two ways:

1. In any city, talk to the Warper NPC or use @instance command. Select Instance, then Endless Tower

2. On Misty Island, the party leader must speak to the Tower Protection Stone. To generate the instance select ►Generate dungeon Endless Tower, to enter ►Enter the Endless Tower.

After the instance is spawned, it can't be more than 5 minutes empty, otherwise it will be destroyed and the player that spawned it can't create another one for 6 days and 20 hours. The time limit for staying in the tower is 4 hours, if the group cannot finish the tower in 4 hours the instance will expel all players to their respective return points and will be destroyed.

Every 25 floors, you will receive an

Ash Of Darkness , which has the power to advance you 25 Floors for each Ash. On the first floor of the tower, you will find an Flame-like NPC to the right/lower entrance, Immortal Brazier.

After defeating Entweihen Crothen, you and your party can face the king of darkness : Naght Sieger . Just click on NPC Lucid Crystal, located in the upper right corner of the top floor. If it's the first time you've reached the top of the tower he'll send you to Alberta, but you can just talk to the Tower Protection Stone in Misty Island again to return the instance and go up on foot or using the Ashes of Darkness to reach the 76th floor and climb the from there (Be Advise that this cant be done if you generate the instance using @instance command) .

Speak again with Lucid Crystal and you will be sent to an unknown area. Go up the hallway and you will find a portal and a fountain (which restores HP and SP), the portal will send you to Naght Sieger's room where you will face 3 hordes of monsters before the MVP appears.

You can ask the NPC to craft 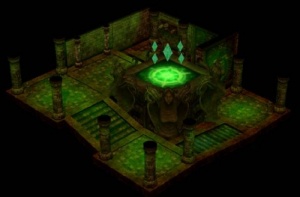 All floors are the same, but when the map is green it means there is an MVP present.